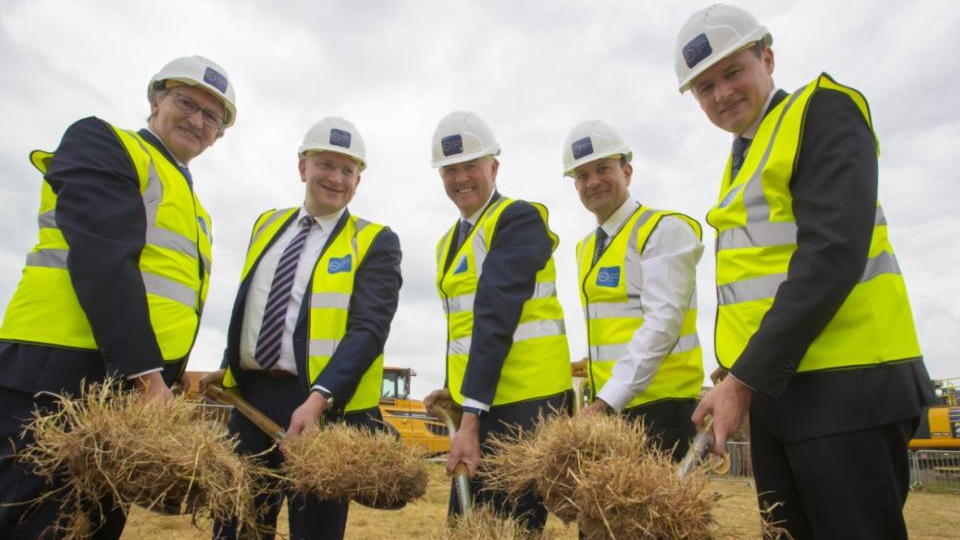 On 22 June, representatives from Glanbia Co-op, international dairy producer Royal A-ware and the Irish Government took part in the turning of the sod at the site of a new continental cheese facility being built at Belview in Co Kilkenny.

The facility, which is being built by Kilkenny Cheese Ltd, a joint venture between family-owned Dutch dairy producer Royal A-Ware and Glanbia Co-op, will have a footprint of 18,000 square metres. It will produce over 50,000 tonnes of continental cheese per year, including Edam, Gouda and Emmental cheese varieties which will be brought to market by Royal A-ware through their established channels.

The production facility will utilise approximately 450 million litres of milk from Glanbia milk suppliers each year. Glanbia Co-op currently sends some milk for processing by third parties during the peak milk supply months; the new facility will allow this milk to be brought in-house for processing in one of the most sustainable cheese plants in Europe. This will consolidate milk processing and reduce transport movements.

The sod-turning was performed by Tánaiste and Minister for Enterprise, Trade and Employment Leo Varadkar and Minister for Agriculture, Food and the Marine Charlie McConalogue. Welcoming the new development project in the south-east, the Tánaiste said;

“It’s an honour to be in Belview today to turn the sod on this brand new €200m continental cheese facility. It’s a huge boost for the south-east which has experienced significant and long overdue investment and jobs growth in the past year or two. The UK’s decision to leave the European Union was a seismic event for Ireland’s agrifood sector and the over 163,000 people it employs here.

“Seven years on from the decision and two years on from when it took effect, the picture is more hopeful than we could ever have imagined. Employment has remained relatively steady and the dairy sector is doing relatively well. The industry has responded successfully to what was potentially disastrous. Our business owners and farmers have risen to every challenge in the past number of years, and there have been many, and have worked incredibly hard to protect jobs and even grow business. I believe this facility is a perfect example of that resilience, that flexibility and determination. Thank you to Glanbia Co-op and Royal A-ware for bringing this vision to life and I wish all involved the very best of luck with it.”

“It is a real honour to be in Belview to turn the sod on this really exciting project. It is great to see this really important project finally come to fruition. This is a great day for the 4,500 Glanbia farm family suppliers as well as for the wider Irish agriculture sector and Irish farmers as a whole. Both I and the Government have been supportive of the project throughout, because of its profound importance to farming in the south-east. It is heartening to know too that Glanbia Co-op is fully committed to a sustainable future for the dairy sector in partnership with Government, through the Food Vision 2030 Strategy. I look forward to continued engagement through these initiatives into the future.”

“We are delighted to partner with Royal A-ware, a leading global producer of continental cheese, to build this world-class facility in the south-east of Ireland. The joint venture approach brings expertise in continental cheese production and a new route to market for our farmers. Today marks a significant step on the road to diversifying our product offering post-Brexit. Our Co-op will also benefit from the additional whey and cream streams produced by this new cheese facility. This facility is essential in the context of a sustainable future for our Co-op and our sector as set out in our Living Proof sustainability strategy.”

“When we first announced our partnership with Glanbia Co-op in 2019, we said we were taking another step towards achieving our goals of working with strategic partners to build innovative and sustainable agri-food chains and offering our customers an enhanced product portfolio. Today’s milestone will see our company bring high-quality continental cheese produced through a local supply chain into the marketplace. We look forward to this great new facility opening in 2024.”

“Dairy is Ireland’s number one indigenous export sector and critically important to our rural economy. Enterprise Ireland is delighted to support this strategically significant investment and looks forward to partnering with Kilkenny Cheese Ltd, as it embarks on this ambitious venture to build one of the most environmentally sustainable cheese plants in Europe. This project will see the creation of high-value exports that will create 80 direct jobs in Kilkenny adding to the prosperity of the south-east region and benefiting over 4,500 farm families. Sustainable growth is a central pillar of Enterprise Ireland’s “Leading in a Changing World” strategy and this project demonstrates the importance of sustainability to the global competitiveness of our Enterprise base and is an exemplar for the sector.”