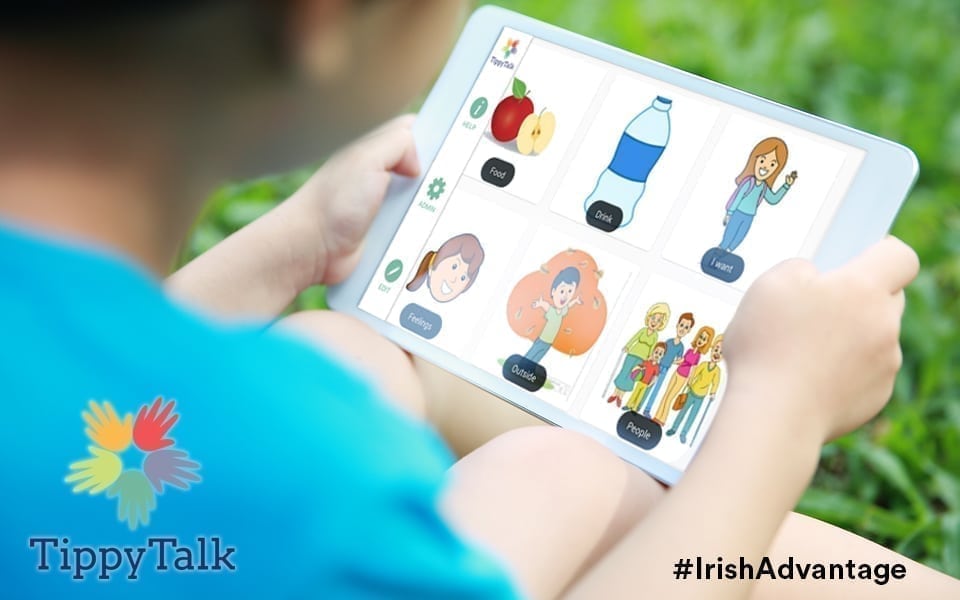 A few years ago, Rob Laffan was waiting in line at a chip shop near his home when his phone beeped. It was a text message from his daughter, with a simple instruction: “I want chicken nuggets.”

It may sound like an everyday interaction but for Rob and his daughter, Sadie, this was an exceptional moment that marked a major breakthrough in their relationship.

Sadie, who had been diagnosed with autism and experienced difficulty communicating her needs verbally, had just used her father’s invention, TippyTalk, for the first time.

TippyTalk is an app inspired by PECS, or ‘Picture Exchange Communication System’, an established method used to assist non-verbal people with communicating a want, desire, need or a feeling.

Using this system, a non-verbal child or adult can point to a picture of their need or want in their ‘PECS book’ so that their carer can provide it for them. However, the method requires that both people be in the same room in order for it to be effective – and so, it can’t substitute for those moments when a child might need to call out to a parent or carer from another part of the house.

Rob and Sadie had some success with the book-based method, but he recognised an opportunity for the system to be improved upon by using more up-to-date technology.

“Sadie doesn’t sleep much,” he explains, “and it was during one of those late-night sessions that I asked myself: What if she could select her pictures on a screen, and send that information to me as a text message?”

This ability to communicate over long distances is one of the key features that marks out TippyTalk as a true trailblazer in its field.

“At TippyTalk, to date, we’re the only ones who are focusing on an ‘out-of-room’ approach to non-verbal communications. All the other solutions out there mean you’ve got to be in the same room as the person you’re communicating with, which is very limiting – not to mention out of step with today’s connected world.

“We have Facebook, Twitter – we can communicate with anyone we want,” he says. “Non-verbal people have been left behind in that sense, which makes this a matter of technological equality.”

By acting on his lightbulb moment, Rob has helped to improve access to communications technology for non-verbal people across the world.

A solution for Sadie

In the early noughties, Rob worked as a pharmaceutical sales rep, but his career in the sector was cut short as a result of the economic downturn.

“I lost my job in 2010, just a week before my daughter was born,” he explains. “It was a kick in the teeth. No financial stability. How were we going to pay the mortgage? There were no jobs out there.”

Concerned for the security of his family, he decided to take action and reskill. He saw potential for employment in the engineering sector and enrolled in LIT to study Automation and Robotics.

“It was about six weeks after I started the course when we noticed that Sadie wasn’t developing as you’d expect a child to develop. She wasn’t interacting, playing with toys or speaking – so alarm bells started ringing. All signs were pointing to autism.”

Sadie was eventually diagnosed, and the family began to engage with various programmes that supported interactions between children with autism and their families.

At this point, Rob also began to relate his studies in automation and robotics to the work they were doing at home to support Sadie and decided to focus his final year project on solving an issue that had become central to his family’s life.

And once that penny dropped, the rest fell into place remarkably quickly.

“For six months, I built out the code and the program. In April, I finalised it and introduced it to Sadie. Then, after only a day or two, we had our first communication: the order for chicken nuggets!”

A string of successes at nationwide student awards convinced Rob that he could translate TippyTalk from a final year project into a marketable product.

“After my final year project presentations, someone asked me if I’d heard about the [Irish] Student Entrepreneur Awards. I looked it up and I thought, that’s something I should look into – even if to only get placed. In the end, I entered, and I won it. Then the same thing happened at the Innovative Student of the Year award. I was called up to the final and won again.

“That was when I realised that this was the real deal. At that point, talk of finding jobs was in the past – TippyTalk was my job.

A stint in Enterprise Ireland’s New Frontiers programme – a “bootcamp for entrepreneurs”, as Rob puts it – was enough to fill in the gaps around how to commercialise and build out the business from that initial spark of inspiration.

It was through this work that Rob made a fundamental decision to shift the offering from a hardware product to an app, in order to reduce the cost from a large outlay to a monthly user service charge.

“Some people become verbal over time, and some people don’t,” Rob explains. “Changing from hardware device to an app meant that people could use it for as long as they needed to and didn’t have to invest long-term.”

Using an app also means that parents and caregivers can capture photographs of particular items from the non-verbal person’s life via the camera function on their phone or tablet. They can also record speech to accompany the picture, which further encourages the development of language skills.

“With Sadie, we’re now really focusing on her verbal communications and TippyTalk has made that process much easier. In times of overwhelming stimulus, when she can’t get the appropriate reaction out, the app is there.

“That’s a hugely important safety net for us.”

As well as facilitating private communication between non-verbal people and their families, the upcoming Version 2 of TippyTalk will also be aimed at the classroom, allowing teachers, special-needs assistants and carers to communicate with non-verbal people in their professional settings.

Bringing the technology out of the home and into a public setting creates a truly unique opportunity to analyse the data from communications with non-verbal people.

“We’re creating a web portal where communications can be logged. This can be used for educational analysis, analysing KPIs, and looking at variances between in-room and out-of-room communications. For example, we could find out what the most frequently requested items are, or which feelings are most prominent.

“We can gather data that has never been gathered before.”

Rob suggests that this data can be used to make improvements in educational settings – analysed to provide an indication of teaching quality, for example, or used to customise the curriculum of classes and school-based activities to better suit the interests of students.

Building out the B2B element in this way means that TippyTalk can make a positive impact on the non-verbal community in ways far beyond personal communications technology.

While most of the team is based in Ireland, 81% of TippyTalk’s business is in America. They have strong bases in Texas and Wisconsin, where the app is state-funded.

“We just have to market to those states. We need to get in front of the end-user.”

But while Rob has been busy developing TippyTalk into the global business it is today, his innovation has also been hard at work where it matters the most – at home, with Sadie, helping to nurture and develop the relationship he has with his daughter.

“When she started sending out her first texts, they were just items she desired – food, drinks, toys. But over the next few months, she started to express feelings. Her personality started to come through.

“Now she can even make a joke with us. She might send a message to me saying, ‘Hi Daddy, I feel sad’ – but when I’ll look over, she’s just sitting on the sofa, smiling away.”

For a limited time, TippyTalk EDU is also available to schools and professionals in Ireland for free.