The future of money: digital and contactless 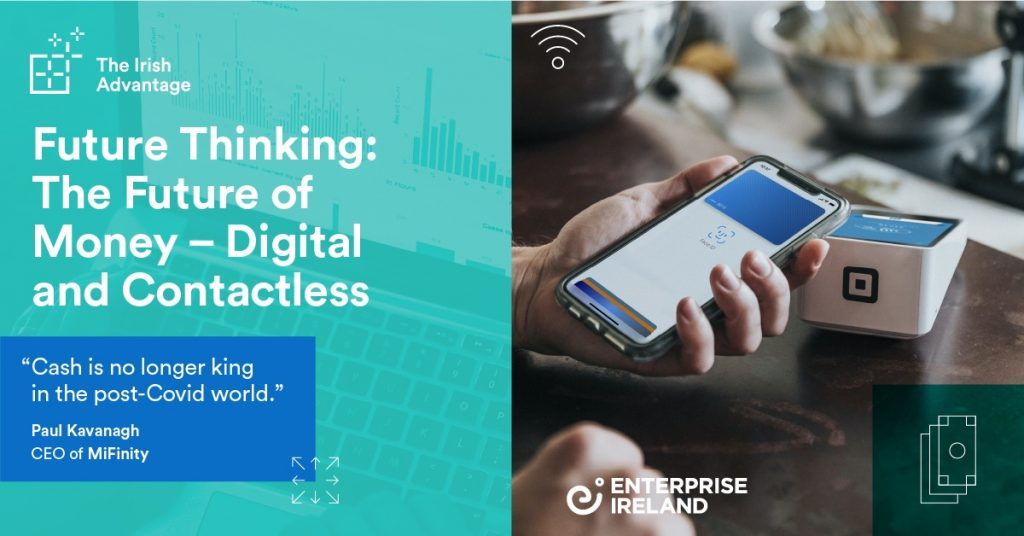 While the shift to digital payments was already happening around the world, the Covid-19 crisis has accelerated the crash of cash.

If you have a pile of defunct bits and bobs in your attic, basement or shed — cassette tapes, film canisters, phone books and so on — you might be chucking your wallet or billfold on top of that pile sooner than you think.

While the world was already moving to digital money, the Covid-19 crisis has dramatically accelerated the decline of cash. Contactless payment limits were raised in many countries to facilitate social distancing and many small businesses banned the use of cash entirely to reduce risk. In both the UK and Ireland, ATM withdrawals fell by about 60% during the lockdown.

“Cash is no longer king in the post-Covid world,” says Paul Kavanagh, CEO of Irish payments firm MiFinity, which has seen use of its e-wallet grow since the outbreak of the pandemic. “There is a switch happening from physical money to virtual equivalents that appears to have reached a tipping point right across the world.”

The cashless society becomes a reality

Even before the pandemic, the decline of banknotes and coins was clearly evident. In parts of Scandinavia, cash is becoming rare and Deloitte predicts that Sweden will effectively be cashless by 2025.

Most developed countries are heading the same way. One in 10 adults in the UK live almost entirely without cash, but that figure rises to one in six for those aged 25 to 34, according to banking body UK Finance. It also says cash is used in fewer than a quarter of payments now, down from 58% in 2009.

From contactless cards to microchipped hands

Juniper Research says contactless payments worldwide will reach US$6 trillion by 2024, up from US$2 trillion last year. This will be driven by increased contactless payments in stores and restaurants, and on public transport, along with the use of digital wallets such as Alipay, WeChat Pay, and GrabPay, which are already hugely popular in Asia.

Even more radical change could be on the way, says Kavanagh. “You might laugh to think it, but by 2030 or at least within my lifetime, you’ll have a microchip in your hand that will give you access to your front door, access to your car and access to your bank account. You’ll scan the palm of your hand to make payments rather than a mobile device.”

While charities and churches are already going digital for campaigns and donations, and businesses such as Ikea expect huge productivity gains as the time needed to handle cash declines, a cashless world won’t suit everyone, he adds, particularly those concerned about privacy.

“The cashless society has many advantages,” says Kavanagh, “but I would say that because MiFinity is an omnichannel payments provider.

Furthermore, Kavanagh estimates about 20% of people will always prefer holding physical cash and using physical banks. The true figure may be higher. The European Central Bank estimates about a third of euro notes are held by households in case of a rainy day.

Banks under threat from mobile wallets

With e-wallets such as that offered by MiFinity enabling consumers and businesses to pay or send money to anyone at low cost and without the recipient needing a bank account, Kavanagh says banks must change.

“Banks need to adapt or they will be wiped out. They are dinosaurs in a digital age. Their technology is working off old technical languages and they are not bringing in new developers and committing budget to changing their technical architecture. Newer payments providers are agile, adaptable and scalable.”

Given how easy e-wallets can make it for businesses to handle international payments, Deloitte’s prediction rings true. E-wallets like MiFinity’s can be especially invaluable for businesses that deal with customers in many different countries who use different currencies, such as gaming, travel and insurance firms, for example.

An eWallet gives businesses an easy and secure way to make and receive payments across borders, from prepaid, debit or credit cards (including Visa, Mastercard and UnionPay in China) or to and from any bank account anywhere. MiFinity operates in 180 countries, 80 currencies and 19 languages, meaning businesses using it can cater much more easily to an international customer base.

While security and cybercrime can be a concern for both consumers and businesses when it comes to using digital payments, Kavanagh is quick to address this potential worry. “As a regulated financial institution, we abide by the European anti-money laundering (AML) and counter-terrorist financing (CFT) directives. We operate advanced AI fraud-prevention tools and strategies to safeguard against all forms of fraud and cybercrime currently infecting the financial arena.”

“Covid has shown us that now more than ever, the online payments sector will rely on trust and we are working to meet the rapidly changing needs of clients, no matter where they are in the world. We’re also busy establishing new strategic partnerships to support the future of money.”