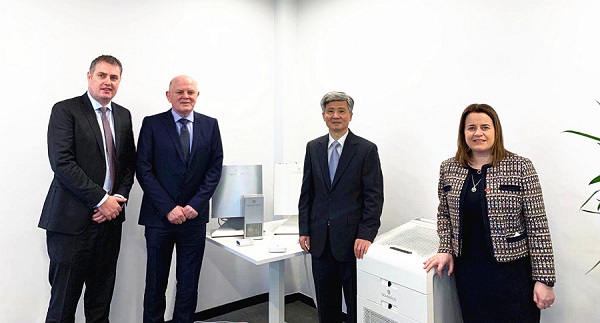 Novaerus provides the power of plasma

The outbreak of a new coronavirus has confirmed a fact long understood by Irish company Novaerus: we are what we breathe.
The company manufactures and sells patented medical-grade, clean air solutions. Thanks to new partnerships with established distributors across China, its portable air disinfection units are being made available to healthcare facilities in Hubei, Beijing, Shanghai, Zhejiang, Guangzhou City and the Chinese special administrative regions of Hong Kong and Macau.

It comes at a time of growing concern surrounding the recent infectious outbreak caused by a novel coronavirus first identified in Wuhan, Hubei Province, China. Indeed this week, the Chinese Ambassador to Ireland, Mr He Xiangdong, visited Novaerus, who have donated several air dis-infection devices to two hospitals in Wuhan, the Chinese city at the centre of the COVID-19 outbreak; Wuhan Xincheng Hospital and Wuhan Third People’s Hospital. Among the donation of goods is a Defend 1050 for each facility, the company’s latest innovation in infection control. The Defend 1050 is a mobile solution designed for rapid remediation in large spaces and situations with a high risk of infection.

Coronaviruses (CoV) are a large family of viruses that cause illness ranging from the common cold to more severe diseases such as Middle East Respiratory Syndrome (MERS) and Severe Acute Respiratory Syndrome (SARS).
The current outbreak is a new strain that has not previously been identified in humans. It’s not yet clear how easily it spreads from person-to-person. However both MERS and SARS are thought to have spread via respiratory droplets produced when an infected person coughs or sneezes, similar to how influenza and other respiratory pathogens spread.
“The most difficult disease transmission-route to guard against is airborne because we have very little to protect us when we breathe,” says Dr Kevin Devlin, CEO at WellAir, the parent company of Novaerus.

Currently very many people in affected regions – and further afield – have responded by wearing surgical masks.
Yet while masks may help guard against the kind of particulates seen in air pollution, they are ineffective against the much smaller size of viruses.
Cleaning the air is a fundamental component of managing infectious outbreaks. However standalone filtration systems are typically unable to trap tiny viral particles too.

Novaerus’ portable air disinfection and purification units are unique in using a patented plasma technology that kills airborne viruses. Its devices suck air from a room and pass it through patented plasma coils to eradicate viruses.
So destructive is Novaerus’ technology that he likens it to passing bacteria through “a field of lightning – particles get destructed as they pass through.”

The company makes a range of devices, the biggest of which can take in 900 cubic metres of air per hour and is used in large spaces. The smallest takes in 80 cubic metres of air in an hour. All run 24 hours a day, using very low power, and reduce the risk to people coming into and out of that room dramatically.
Its units can be used to remediate rooms post-infection rapidly, which is why its primary market is medical facilities. These range from doctor surgeries and waiting rooms to hospital operating theatres and wards. “Anywhere there is a need to reduce the risk of cross-infection,” he says.
The efficacy of Novaerus products have been independently tested and verified across a range of pathogens including measles, influenza and C-diff, as well as fungal spores in buildings.
In fact the biggest challenge it faces are lower quality plasma products currently in the market, he says. These operate in a totally different way, typically by sending out ions into a room which are charged to attract pathogens before having them fall to the ground or onto surfaces where they can be disinfected.
Novaerus’s patented technology is entirely unique in killing them, at speed.

As word of its effectiveness has spread, it has witnessed enormous interest across Asia Pacific, including countries such as South Korea, Vietnam and China, where it is currently opening its first office, in Shanghai.
“Our products are aimed at anywhere there are people but we have always found it easier to get our message across in Asia, where people are already very conscious of the risk from pollutants in the external air,” says Dr Devlin.
“There are already a lot of solutions in this market, including ones which use HEPA (high-efficiency particulate air) type filters or masks, but these are effective only for particulates. Again, viruses are much smaller and can pass through them,” he says.
Novaerus machines are effective against hospital ‘super bugs’ and are an inexpensive solution for hospital systems, “particularly given the cost of post-operative infections, such as where a hip replacement has to be done again”, he points out.

Today Novaerus sells into medical facilities in 40 countries, including its main market, South Korea. In October 2019 it signed a partnership in that country which will see its products sell into the high end consumer market too. It’s a first for the company but a move likely to be replicated elsewhere.
“South Koreans are very aware of exterior air quality,” says Dr Devlin. “We launched in that country prior to the current coronoavirus outbreak and know that products that are successful in South Korea transfer well around other countries in Asia Pacific.”
Already it has seen significant growth in demand throughout the region. “It helps that everything we say about our product is the result of independent tests. It’s not something we are pulling out of the air.”

Kastus ready to coat the world