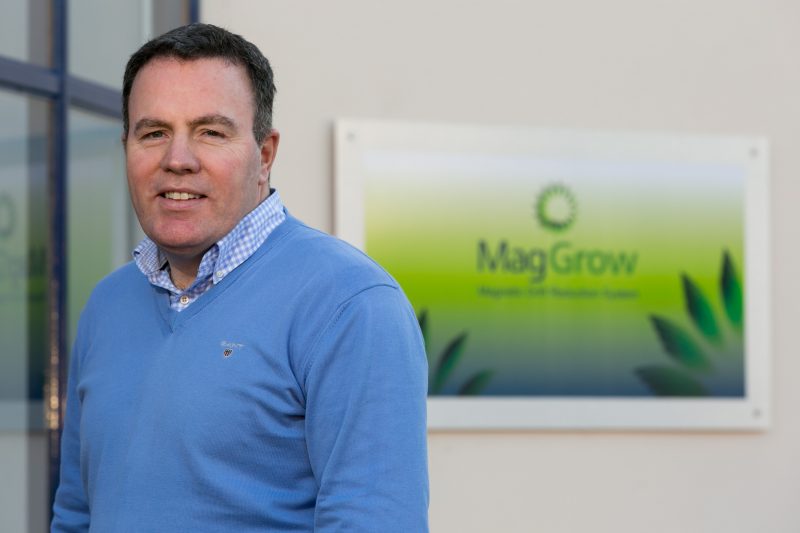 MagGrow is a young company with big ambitions. Their goal is to help feed the world.

Six years ago, Gary and his co-founder David Moore set up MagGrow in NovaUCD, the Irish incubation centre in University College Dublin, to solve the problem that more than 70% of pesticide spray sprayed around the world doesn’t reach its target.

Gary explains: “Conventional spray technology uses large nozzles and water in the spray solution to try and control the droplets by making them larger. The result is that they’re like raindrops – they run off, splatter and bounce off the crops, so they actually make the problem worse because then you have this huge run-off problem.

“That spray – be it fungicide, herbicide or insecticide – which is missing the target, ends up in neighbouring crops, neighbouring fields and rivers and streams, contaminating the environment with unnecessary waste.”

The MagGrow system is a patented, proprietary technology for droplet formation that yields superior spray drift-reduction and spray coverage performance.

“This allows growers to use smaller nozzles without the associated drift problems and gives you that better efficacy in coverage and disease control,” Gary says. “Basically, farmers are able to use 50% less chemical and water to do the same job. We’re reducing the 70% waste to 20%, and in some cases less than 10%.

“Additional benefits include that farmers can use our system in higher wind speeds, it has no moving parts with little or no maintenance and can be retrofitted to tractor booms – you don’t need a new kit.”

MagGrow’s markets include North America, Europe and South Africa, and will soon include South America and Asia as a result of the Trimble Partnership. The company works with growers including Driscoll’s farms and Reiter Berries, as well as research centres such as Wageningen University in the Netherlands and Pacific Ag research in California to develop and test their technology. Three years and €10 million in R&D later, MagGrow now has products for both indoor and outdoor growing. 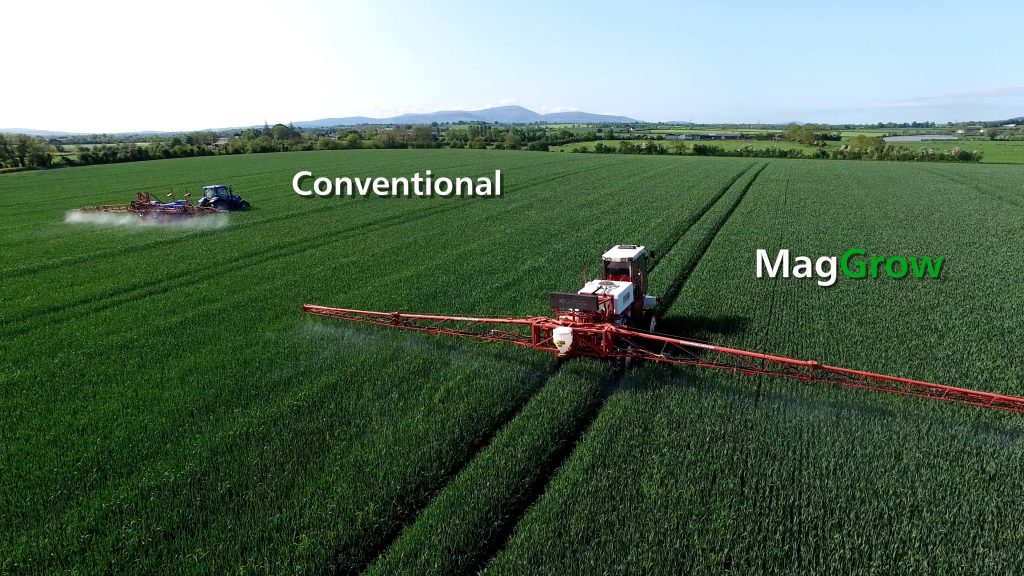 How MagGrow stays at the forefront of agritech innovation

The boom kit is the core product for retrofitting to existing boom sprayers, and MagGrow has retrofitted every major Original Equipment Manufacturer (OEM) machine type. The boom kit can also be installed on new sprayers. A backpack product is available for horticultural greenhouse applications, which saves 50% of chemical and water for growers, and just like the boom kit product, has a typical return on investment of less than one year.

The cost of a MagGrow system varies according the size of boom but for a typical 32-metre system, it is in the region of €35,000.

MagGrow has opened facilities in three leading research institutions to ensure it remains at the forefront of agritech research and development in order to develop new Intellectual Property (IP) and products, and also to support customers.

Gary comments: “In Harper Adams University in the UK, we have opened a facility around Industrial Engineering and Applied Research. We also established a Crop Science Centre At Farm491 in the Royal Agricultural University, where we do field and semi-field (indoor) testing; and we’re also working with Trinity College Dublin on pure research projects as part of a co-funded Science Foundation Ireland AMBER (Advanced Materials Bioengineering Research) project.”

MagGrow has been supported by Enterprise Ireland under its High Potential Start-Ups programme, and it was through connections made by the Irish trade and innovation agency that the company was introduced to Trimble – a $3 billion revenue company with several divisions including agriculture. Solutions from its agriculture division, Trimble Agriculture, allow farmers to operate more efficiently and productively, saving on input costs, and helping them to apply those inputs in a safe, responsible way.

Gary says: “It’s an ideal partnership, as both companies are brand agnostic, focus on precision agriculture, and want to help farmers grow sustainabily by using less inputs to grow more and, in the process, meet their environmental targets.

“We signed a worldwide agreement with them in January to distribute our product globally under what’s called a Trimble Select Program. This gives us access to Trimble’s fantastic worldwide network, as well as being associated with a fantastic brand.

“We have sold over 100 units to date. This year, we forecast to sell about four times that – and possibly higher. We mainly sell through dealer distribution channels but also sell direct to certain large growers as well.”

The Trimble deal is the culmination of six years of hard work, which has seen the company grow from two to 30 employees, including recently being awarded ISO 9001:2015 registration from the National Standards Authority of Ireland (NSAI).

For MagGrow, however, this is just the beginning. Gary says: “Over the next 40 to 50 years, the world needs to grow the same amount of food as in the previous 10,000 years combined, in order to feed a global population forecast to hit more than 10 billion people.

“We have a huge food and water challenge globally. Already in places like California, Asia and Africa we’re using more than 80% of all water for agriculture alone, so we really do need to grow more but also grow sustainably. Critically, MagGrow allows farmers to do both.”

Gary ultimately wants to see MagGrow as a standard piece of kit in new or retrofitted sprayers, helping growers improve their profitability and feed the world in a sustainable way, as well as meeting their environmental targets.