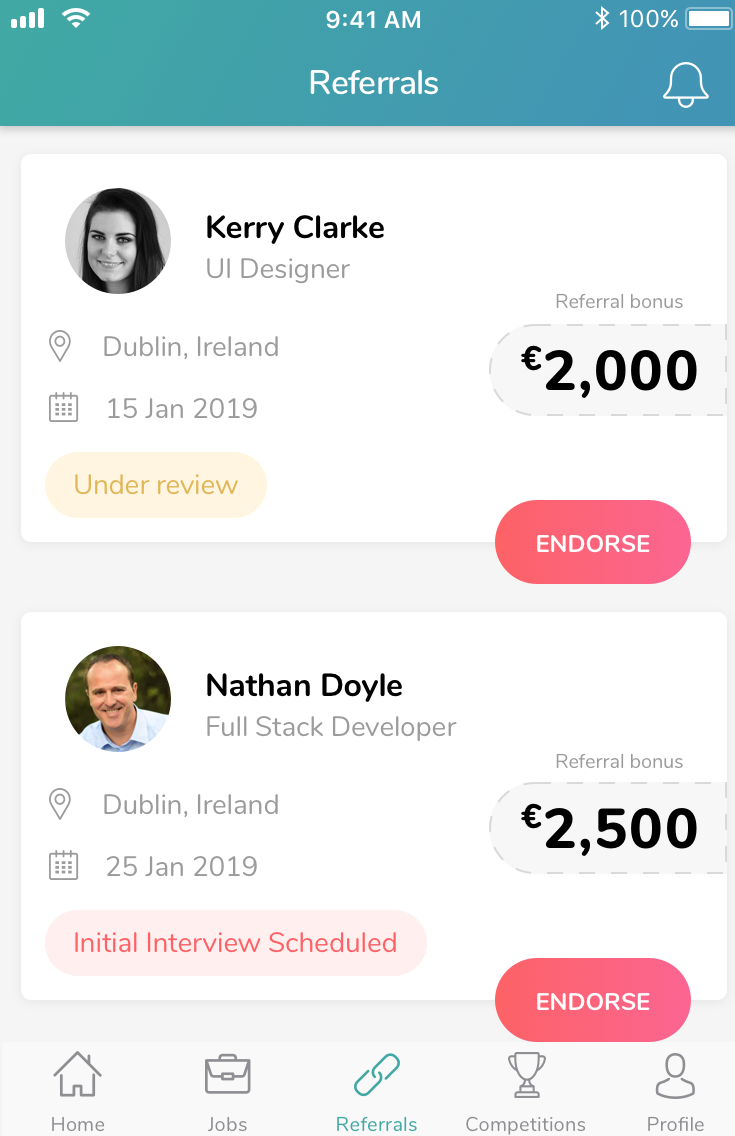 Sometimes the most obvious solution to a problem is the last to get adopted, but as the pressure to find suitable talent grows, referral schemes are taking centre stage and a new app is making a big difference in recruitment.

The instinct to ask around when you’re looking for someone to help has long found a place in recruitment in the form of harnessing employee networks and asking those around you if they know someone they’d put forward for a role. Now, a ground-breaking Irish tech start-up has taken that to the smartphone generation and created a 24/7 solution for hard-pressed HR departments hunting for talent.

HireUp was started by two software developers, David Maloney and Nathan Doyle, in 2016 and it quickly secured funding from Enterprise Ireland’s competitive start-up fund followed by mentoring from the Dell Global Entrepreneur Programme. Now the company is growing fast with clients in Ireland, the UK, Poland and Norway, and it’s been so successful for professional services organisation KPMG, with the company receiving more referrals in just over six weeks since using the app than during the whole of the previous year. HireUp also plans to expand into the US.

Gary Berney, Sales and Marketing Manager at HireUp, says: “Everyone has a network of contacts, what we do is help employees to receive bonuses from their companies for accessing their network to find the next talented hire. By focusing on mobile, we allow them to refer a contact at a time and a place that suits them. Around 60% of the sharing of jobs through our software takes place out of work hours. That wouldn’t have been the case in a traditional referral programme.”

Referral schemes are not new, but HireUp is made for a workforce that is always online. According to research in 2018, the average adult spends 3 hours 35min per day on mobile devices, with 90% of that use via apps. This is the social and mobile generation of millennials and others who connect with the world around them through apps on smartphones and tablets throughout their day, whether they’re working or not.

“When employees commute, they’re flicking through available jobs in their company on their mobile phones, and when they realise there’s a role perfect for someone in their network, they share the job and they’re done,” says Berney. “It’s a really slick, easy way to engage your employees and get them to do the recruitment work for you and that’s where the recruitment savings come in.”

In addition to the success with KPMG, the app is also having a big impact with other companies such as Permanent TSB, which is seeing its speed to hire increasing rapidly, due to the quality of referred candidates.

And in a fiercely competitive field, HireUp is constantly innovating to stay on top of the game and will soon be offering customers a special internal recruitment feature.

“Internal recruitment is a problem for a lot of companies,” adds Berney. “How do you inform employees of every opportunity to progress in a company when the particular business unit you’re working in doesn’t display jobs for other parts of the company for fear of losing their talent. The reality is, though, that if the company doesn’t inform employees of opportunities elsewhere in the organisation, employees will leave the company, taking their knowledge and talent with them.”

HireUp’s four pillar areas are finance, legal, tech and pharma, with a growing interest from public sector, engineering and retail. The software can lend itself to any business, but it performs optimally for firms with 500 employees or more. With strong growth in the UK and Ireland, the company secured €500,000 in February 2019 from, among others, the EY Entrepreneur of the Year, Patrick Joy, of Suretank Group.

HireUp has been working with Enterprise Ireland since 2016. The Irish government trade and innovation agency has supported HireUp with its strategy for growth. David Corcoran, Global Talent Management Lead at Enterprise Ireland, says: “The prevalence of apps used by the smartphone generation makes it ideal that companies use this technology in their recruitment processes. HireUp has tapped into the culture that enables people to share job opportunities with friends and colleagues, which, in turn, makes it simpler for companies to recruit new staff.”