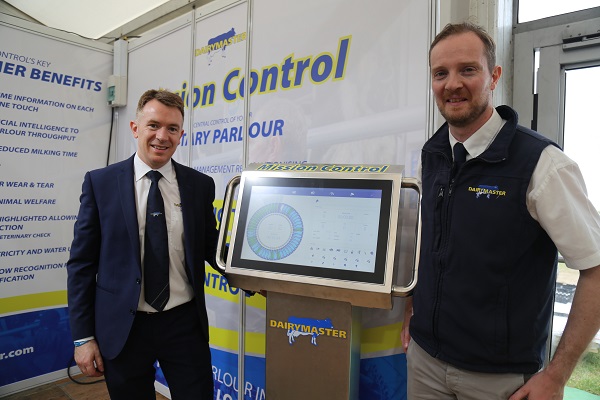 Lorcan Allen visits the headquarters of milking technology company Dairymaster in Co Kerry to learn of the agri-tech ecosystem emerging in the country.

On the surface, the rural village of Causeway in Co Kerry may seem like an out of the way place to build a global engineering business. Yet it’s no surprise that Dairymaster, the family-owned milking technology company, has developed and thrived in this part of Ireland.
North Kerry is a dairy powerhouse. Just over 20km up the road is Listowel, the town where the global taste and nutrition giant Kerry Group established its first milk processing plant – a facility still going strong today.

Situated in this dairy farmer stronghold, Dairymaster has grown into a business exporting milking machines, bulk tanks, automated feeding systems and manure scrapers as well as cutting edge herd health monitoring devices to dairy farms all over the world.
Almost three quarters of the group’s sales are generated in export markets, including the US, Japan, Russia and the UK. In Germany, Dairymaster has grown to account for 25% of the milking machine market.
With more than 4.3m dairy cows and 60,000 dairy farms, Germany is the largest milk producing member state in the EU and has become the single most important market for Dairymaster in mainland Europe.

At the heart of the company’s success is a relenting focus on R&D and using new technology.

“Technology is at the heart of what we do,” says Edmond Harty, Chief Executive of Dairymaster. “The question we ask ourselves continuously here is what does technology allow us to do? I like to describe it as trying to build a better cake. We can take new ingredients like machine learning, artificial intelligence (AI), connectivity and internet of things (IoT) to make our products more attractive to our customers,” he adds.
While connectivity means more real-time data is being collected from Irish farms than ever before, Harty says it’s no good unless your technology can run an analysis of that data and deliver useful management insights to the farmer that will allow for better decision making.

Herd monitor
Dairymaster’s answer to this is the MooMonitor+, a herd health and fertility monitoring system which the cow wears around its neck.
“Our MooMonitor is taking about 3 million readings on each animal every day” says Harty. “So that’s the level of data collection that’s possible. However, our technology is then able to analyse all of that data, send it up to the cloud and send about 210,000 analysed readings for each animal every year. So connectivity is important but real-time data analytics is crucial to helping the farmer make the right management decisions for the herd,” he adds.

Testament to the group’s reputation for innovation, Dairymaster hosted a visit from Dr Juergen Voegele, head of agriculture at the World Bank, in 2014. With a PhD in Agriculture Engineering from the University of Hohenheim in Germany, Dr Voegele was keen to learn first-hand about the innovation and R&D work at the Kerry-based company.

Dairymaster underlined its commitment to on-farm research in 2016 when it joined the €2.3m partnership at UCD Lyons dairy education and research farm. The company was one of seven Irish agribusinesses that backed the Lyons farm, which was established to investigate innovative models of milk production and educate young dairy farmers.
The Lyons dairy research farm was also supported to the tune of €1m from the Enterprise Ireland Innovation Partnership Project. All 200 cows on the Lyons farm wear Dairymaster’s MooMonitor+ monitoring system, while the milking parlour is fitted with the company’s Swiftflo Commander technology.

Investment
More recently, Dairymaster signed a €2m R&D partnership with the Institute of Technology Tralee, the Irish Software Research Centre LERO and Science Foundation Ireland. As part of this partnership, a team of researchers will be hired to work with LERO and Dairymaster R&D teams.
These will include PhD students, scientists and engineers with backgrounds in embedded electronics, sensor technology, software development and data analytics. As part of the R&D programme, Lero and Dairymaster will look to develop autonomous systems to ease the workload on the dairy farm.

“The challenge of attracting people to work in farming is only getting harder,” says Harty. “It’s becoming increasingly difficult to find people who have the skills and the interests to work in agriculture. That’s why developing labour saving technology is so essential for the future of farming,” he adds.

Agri-tech ecosystem
The presence of a global player in agri-technology and agri-engineering like Dairymaster in Co Kerry is having a mushroom effect with an agri-tech ecosystem beginning to develop in the county.
In 2017, a new collaboration was announced between Dairymaster, McHale Engineering, Abbey Machinery, Kerry County Council and the Institute of Technology Tralee to develop an agri-tech centre of excellence, known as ACE, at the Institute of Technology Tralee.

This new centre of excellence for agri-tech R&D and training, which was co-funded by Enterprise Ireland under the regional development fund, will position Kerry as the national leader in agri-tech R&D as well as enhancing the county’s reputation for agri-tech internationally.

Collaborations like this are win-win for a company like Dairymaster. The company gets to work closely with research institutes to develop and trial new and emerging technologies, while it also provides an excellent pipeline of talent for the company into the future.
When viewed from a distance, an ecosystem of agri-tech innovation is emerging around Dairymaster and its global success story. It’s just another success story in the Kingdom.