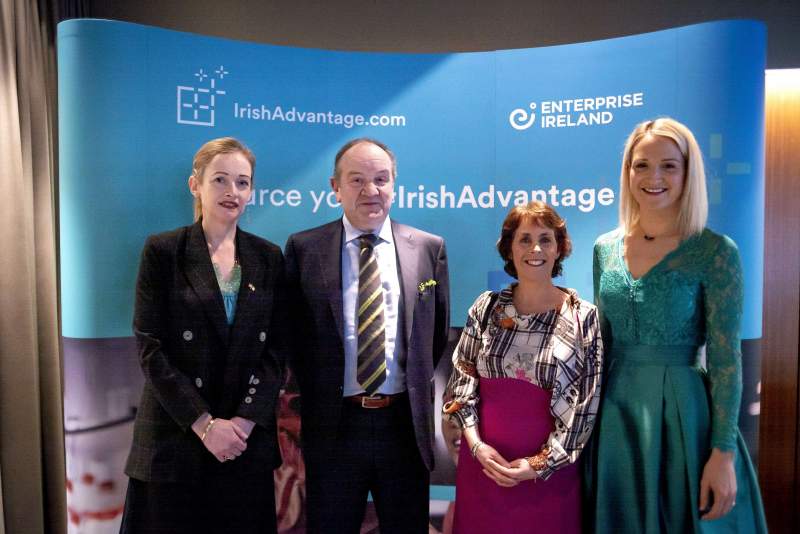 Irish company Critical Healthcare has signed a deal worth €10 million over five years with the leading international private provider of emergency services in Europe. The announcement was made by Minister of State for European Affairs Helen McEntee at a St. Patrick’s Day reception hosted by the Irish Embassy in Copenhagen at the weekend.

Critical Healthcare provides a comprehensive range of medical products and services to ambulance providers and the pre-hospital market across Ireland, the UK and Europe.

It has completed the deal with Falck, who has over 100 years of history within emergency, assistance, safety and healthcare services. Falck is the leading international private provider of emergency services and the only intercontinental ambulance provider.

Headquartered in Denmark, Falck has operations in 35 countries and its 2,500 ambulances respond to four million emergency calls every year. The company also provides many other pre-hospital services, including emergency helicopters and rapid response units with paramedics, nurses and doctors.

Founded 18 years ago by Seamus Reilly and Anne Cusack in Ireland’s midlands, where it is still headquartered, Critical Healthcare employs 22 full-time staff. That figure is set to at least double over the next five years as a result of the deal,  which centres on Critical Healthcare’s multi award-winning procurement platform Medlogistix, in addition to other projects.

Medlogistix has dramatically improved the supply chain and procurement landscape for the National Ambulance Service of Ireland, as well as multiple emergency service providers in the UK.

The deal is estimated to be worth approximately €2 million per year over a period of five years, with a total contract value of €10 million.

“We are absolutely thrilled with our collaboration with Falck and look forward to a long and fruitful relationship with them. This is a massive commitment by them to entrust this business with us and we are looking forward to being able to repay that trust by delivering a world-class, quality service to Falck across Europe.

“The impact of this collaboration is an important milestone in the company’s progression and represents significant growth for us over the coming years. We have 22 directly employed staff in Westmeath, where our business is growing strongly. But with the new Falck deal, and other ongoing work, that number is set to increase further – by around 30 new hires over the next five years.”

“We have already established an office in Germany, opened in January 2019, and initiated our first employee there. We have recruited four further people specifically as a result of the Falck deal. We are currently building the platforms for Germany and Denmark and our aim is to have all four countries operational no later than April. We were able to compete for and win this European contract because we were able to demonstrate the savings our package could offer across all elements of the procurement process.”

Critical Healthcare also especially wanted to thank Enterprise Ireland, the trade and innovation agency, for its help during the procurement process, as well as for its Business Process Innovation grant, which assisted with the development of the Medlogistix.

“It is heartening for me to witness an Irish Small and Medium Enterprise such as Critical Healthcare achieve such fantastic growth through its commitment to innovation and customer service. The fact that Critical Healthcare is forging strong links in Denmark, the UK, Spain and Germany, while at the same time continuing to maintain its dominance in the Irish market and hiring significant numbers in the midlands is a credit to the management and I wish them further success into the future. It is a wonderfully positive story for Ireland and for the Midlands.”

“Across the globe, Irish companies are achieving international sales at record levels and bringing the Irish Advantage to business partners. Internationally, Irish companies are driving innovation and leading across a wide range of sectors including the medtech sector, with Ireland being the second largest exporter of medtech products and services in Europe. Critical Healthcare, an Enterprise Ireland-supported client, is a great example of the success and innovation that is emerging from Ireland and the deal announced today is hugely significant for the company and their Danish partners Falck.”