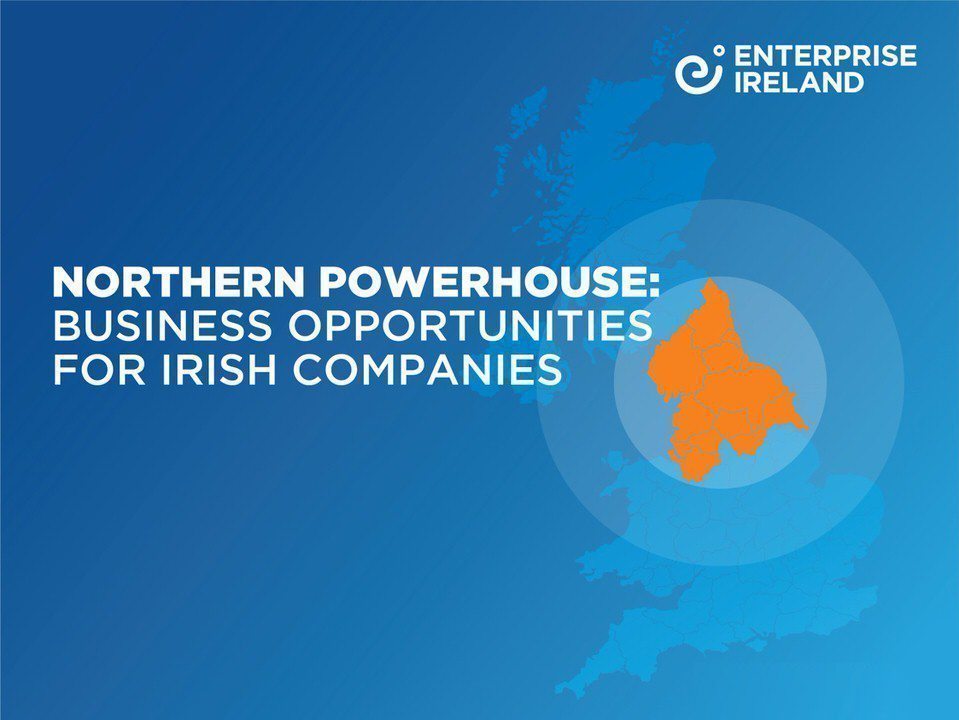 How Ireland can propel the Northern Powerhouse region forward

Ireland’s engineering industry is accelerating faster than ever, with Irish companies exporting over £0.4 billion to support the UK’s growing industry as of mid-2017, making the UK the country’s largest export market. Trade between the UK and Ireland directly supports over 42,000 jobs in the engineering space (Source: Enterprise Ireland, Irish Aviation and Aerospace data, 2017).

The UK is also responsible for £6.48 billion, or 35%, of total exports of Irish owned exporting businesses (for info, total exports from Ireland to UK are actually around £31 billion).

The scale of that activity is generating strong business and partnership opportunities, one example of which is mutual collaboration with UK partners on the ambitions set out in the UK’s Northern Powerhouse project, which aims to empower cities in the north of England.

Growing faster than anywhere else in the UK, if the north of England was a country, it would be the 10th largest economy in Europe, exporting £49 billion worth of goods each year and accounting for nearly 20% of the UK’s overall gross value add (GVA).

Northern Powerhouse is a UK government initiative that aims to rebalance the economy, by maximising the combined potential of the north of England’s cities and regions, including Leeds, Manchester, Liverpool, Newcastle, Sheffield and Tees Valley, an area of approximately 14,400 square miles with a population of 14.9 million people. The goal is to create a collection of modern cities sufficiently close to each other that ‘combined they can take on the world’, driving business, skills and economic growth, in order to position the region as a globally recognised economy.

The initiative, which first launched in 2016, is delivering substantial public investment, with a focus on improving transport infrastructure between cities in the north of England and supporting economic activities around emerging capabilities, all of which can benefit from Ireland’s globalised economy, strong infrastructure, and young, innovative workforce.

With an unrivalled global reputation for delivery and innovation, Irish engineering companies offer a competitive advantage to UK partners, which is key to supporting investments in the Northern Powerhouse region.

Theresa Grant, CEO of Trafford Council, comments, “Irish companies are long-standing trading partners to the north of England, contributing to its robust economy and reaffirming Ireland’s successful relationship to this part of the UK. With rail links like HS2 and HS3 and improved worldwide air connectivity opening up, enabling the cities in the Northern Powerhouse to grow and prosper, we anticipate the Anglo/Irish partnership will grow even stronger, as major opportunities to continue to work together and collaborate present themselves.”

The most significant opportunities are likely to arise from new economic activities and clusters, which are largely based on science and innovation. With the European Commission’s 2017 Innovation Scorecard ranking Irish SMEs first for innovation, Irish companies have a leading position internationally.

Brian Crowley, CEO of TTM Healthcare, says, “Since 2012, the TTM Group has been working with NHS Trusts, private hospitals and charitable organisations across the north of England, supporting more than twenty clients and employing 110 permanent and temporary staff. We see this region as of one of the fastest in growth terms for TTM, as we work with amazingly innovative and progressive healthcare organisations. With the support of Enterprise Ireland and Northern Powerhouse, Irish companies are providing modern, innovative and high-quality services across several industries which enhance the growth of the economy in the north of England.”

Ardmac, a construction specialist that works with leading companies across the pharma and technology sectors, has an office in Manchester and a portfolio of clients across the north of England. Ronan Quinn, CEO of Ardmac, comments, “Our business has seen considerable growth in the region in recent years. A significant amount of that business has come from building a shared vision of what our clients want to achieve. The ease of travel between the north of England and our offices mean that we can be face to face with a client within an hour – a key benefit for those working across multiple territories.”

Enterprise Ireland has organised a trade mission to the north of England in April with the aim of strengthening the presence of client companies in the region. Companies interested in exploring opportunities should begin by downloading the Northern Powerhouse report, available here.

How Kirby Group Engineering powers value for clients across Europe