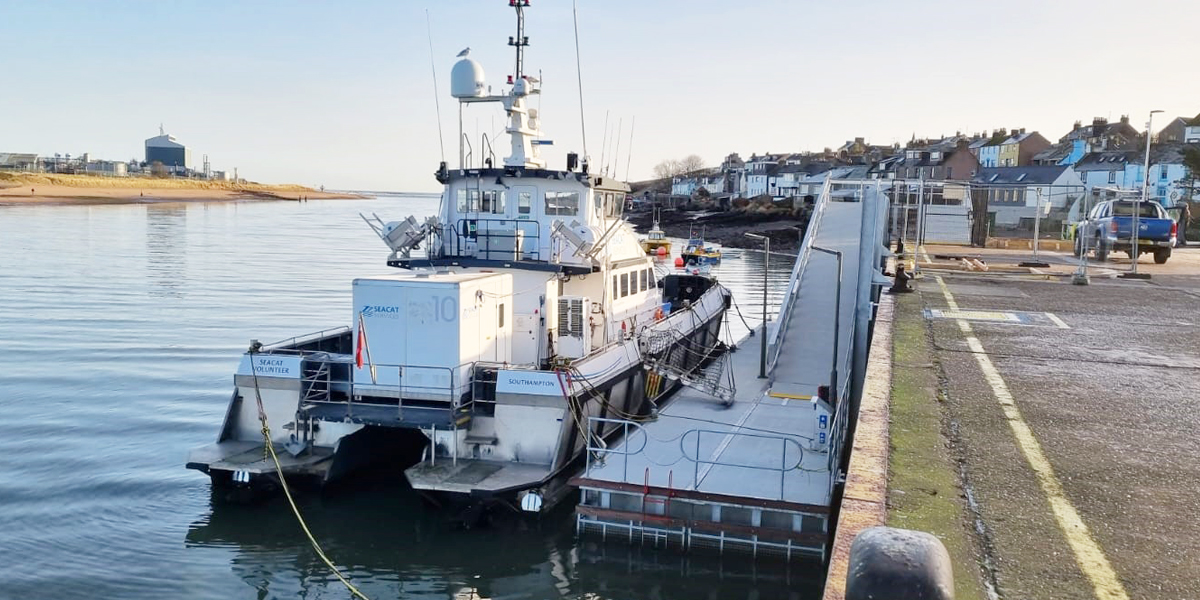 In the early 90s, Oliver Shortall joined Banagher Concrete where he was first exposed to floating jetties for marinas. Years later, these systems would inspire his move into offshore wind.

“Banagher was developing a floating pontoon system based on concrete – it was a real eye-opener for me. A specialism that you wouldn’t learn in college,” says Oliver.

In his role as Marinas Manager, Oliver picked up valuable experience at Banagher Concrete over the next 10 years. When the firm secured the Dublin Port Tunnel Project, an opportunity arose for Oliver to buy out the jetty segment of the business.

In 2002, Oliver and his wife Claire founded Inland and Coastal Marina Systems (ICMS).

The company designs, manufactures and installs all types of floating jetties that allow boats to moor safely and securely. With an initial team of around ten, ICMS began working on leisure marina pontoons, commercial concrete breakwaters, and jetties for council harbours.

“We were extremely lucky to have good people from day one. We added excellent financial, engineers, production, and installation staff along the way”, says Oliver.

With a solid team behind him, he sought out new opportunities.

“About ten years ago, when the first wind farms were being built, we noticed that the maintenance vessels loaded and transferred lots of equipment for their trips. This meant there was a need for specific floating pontoons to berth on,” he says.

In 2017, the company began its first offshore wind project with the Swedish energy company Vattenfall in Aberdeen Harbour, Scotland.

Vattenfall had commissioned a bespoke heavy-duty pontoon for Aberdeen Harbour to provide a berthing facility for crew transfer vessels and working vessels. This was during the commissioning and ongoing maintenance of the Aberdeen Offshore Wind Farm.

Offshore wind developers tend to partner with nearby harbours, where a maintenance area can be allocated. The amount of fuel, power and water their vessels carry is critical in determining the size of an area, so the ICMS team needed to find a solution that worked for all parties.

ICMS went about creating a system that optimised the space that Vattenfall would be using and which was tailored to its specific requirements. Once agreed, the ICMS team began by driving three steel piles into the bed of the harbour, which would anchor and secure the jetty.

“Vattenfall was the first specific crew transfer vessel project we undertook and was a huge learning curve for us. It was a signature project for us and set us on our way,” says Oliver.

After Vattenfall, ICMS’s reputation began to grow in offshore wind. New contracts followed, with Morey East in Fraserburgh, Cobra in Aberdeen, Seagreen Wind Farm in Montrose Port, and NNG in Eyemouth. While the company is still very much active in other sectors, around 15% of its work is now related to offshore wind. That’s seen it increase in size, to a point where it currently employs 40 staff.

ICMS is now well-versed in the challenges that come with offshore wind.

“Every project is different. The number and size of vessels change with every job depending on the wind farm requirements. On top of that, fuel and services will vary depending on the developer’s needs,” he says.

As the Irish offshore industry gains momentum, ICMS continues to innovate and improve how it works with three research and development projects currently in progress.

In the meantime, the ICMS team continues to look overseas for new opportunities.

“Without Enterprise Ireland, it was impossible to break into the industry but now the future is looking bright. We’re looking at France and other European countries as well as further afield in the US,”.

ICMS has benefited as part of Enterprise Ireland’s Offshore Wind Cluster. Along with 60 other companies in the cluster, ICMS has worked closely with Enterprise Ireland to establish key contacts and grow within the industry.

“Enterprise Ireland has stuck with us and helped develop an effective cluster that has brought us on immensely,” says Oliver.

“They opened doors and got us in front of customers where we could develop connections and relationships. Look at it this way, we wouldn’t be where we are today without them.”

Dynamic and mobile in the 21st century: Irish experts for shared micromobility and smart cities work out ways out of the impending gridlock

As a pharmaceutical and medical device manufacturer, how do I ensure broad user acceptance?

Abbott: A promise for life