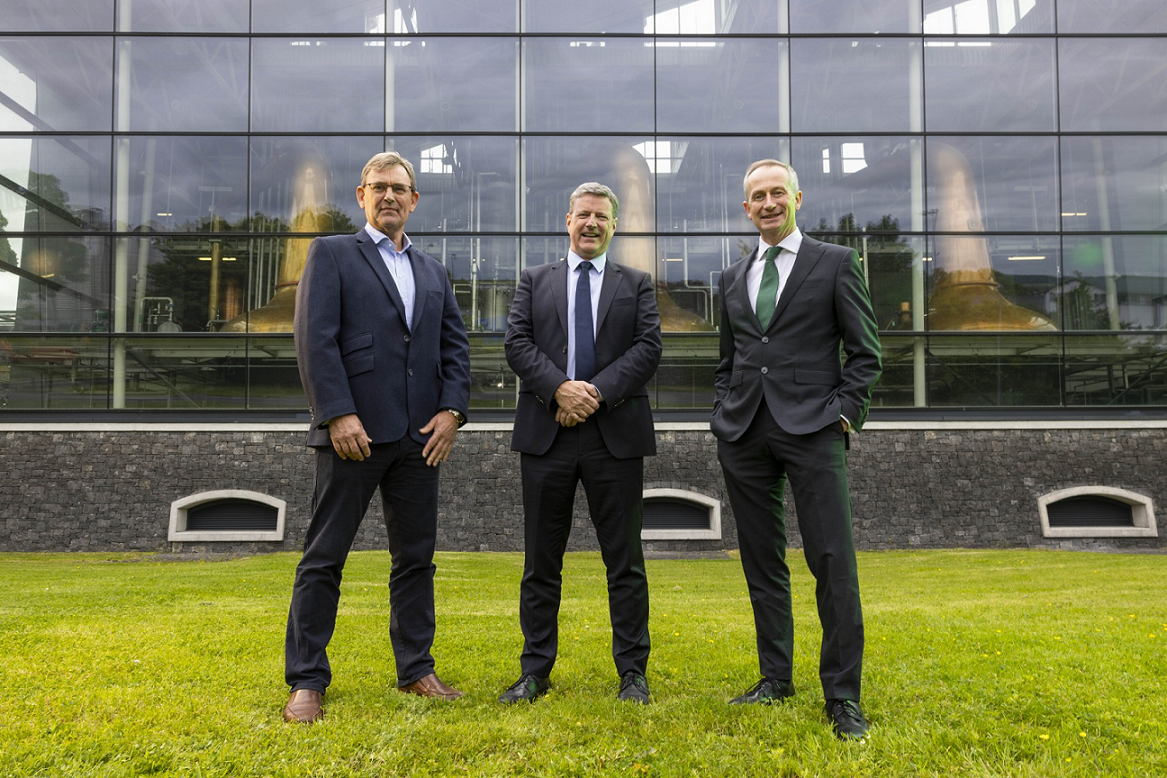 The ambitious plan to eliminate scope 1 and scope 2 carbon emissions by the end of 2026 will involve the execution of a roadmap comprising several ground-breaking projects which will see Midleton Distillery entirely phase out the use of fossil fuels to power its operation.

The carbon neutral roadmap for Midleton Distillery will involve the roll out of several projects aimed firstly at reducing overall energy use by improving on-site energy generation efficiency and recycling waste heat in the distillation process. In time, the distillery’s remaining energy requirements will be fulfilled by generating power from renewable sources.

As part of the initial phases of the roadmap, Irish Distillers has invested in highly efficient boilers which will require less fuel to operate.

To deliver subsequent phases of the roadmap, Irish Distillers is working with global experts and partners on innovative Mechanical Vapor Recompression (MVR) technology which will see a closed looped system capture, compress and recycle waste heat in the distilling process. This the first time this technology has been used across multiple batch processes in distilling.

The first three phases of the roadmap alone are expected to reduce emissions by up to 70 per cent .

The final phases will see the introduction of renewable sources of energy, including green hydrogen and biogas to power the distillery and close the door on natural gas usage. To achieve this, Irish Distillers has partnered with local experts at EI-H2 to explore opportunities to source sustainable renewable hydrogen.

Irish Distillers has also carried out extensive research in partnership with MaREI, the SFI Research Centre for Energy, Climate and Marine, hosted by University College Cork, to determine the biomethane potential of the by-products of distillation and design the required anaerobic digestion process necessary to produce biogas.

Regarding its wider value and supply chain, Irish Distillers has recently completed a mapping exercise of its entire carbon footprint. Based on this data and insights gathered, Irish Distillers has committed to working with suppliers on projects and initiatives to reduce scope 3 emissions across all areas of its business including raw materials, dry goods, transportation, logistics and freight.

Speaking about the launch of the project at Midleton Distillery, An Tánaiste, Leo Varadkar TD, said: “Congratulations to the entire Irish Distillers team for blazing a trail, investing an incredible €50m to become Ireland’s first carbon neutral distillery by 2026. We need to take better care of our planet. Enterprise has a role to play, not just in reducing emissions that come directly from their operations, but by innovating and creating new products and ways of doing things that will help us make the changes that are needed. Companies, like Irish Distillers, who are committing to such bold and transformational change, will lead the way for many other similar businesses and I commend the team for their ambition and commitment.”

Commenting on the announcement, Conor McQuaid, CEO and Chairman said: “Today is a hugely significant day for Irish Distillers as we announce our ambition for Midleton Distillery to become the first and largest carbon neutral distillery in Ireland by 2026. This announcement is reflective of our commitment and ambition to reduce our environmental impact. We understand that our long-term future depends on reducing our reliance on fossil fuels. This plan was many years in the making, and we understand that there are many more years ahead to reach our goal. However, we are confident that by making this bold and brave move into the future, we will leave fossil fuels behind for good. Through the delivery of this plan, we hope to play our part in supporting Ireland’s decarbonising strategy while also aligning with Pernod Ricard’s commitment to follow a Net Zero trajectory by 2050.”

Leo Clancy, Enterprise Ireland CEO, said: “Supporting Irish companies to reduce their carbon footprint is a key strategic priority for Enterprise Ireland. Enterprise Ireland is proud to partner with Irish Distillers to support the roll out of an ambitious roadmap which will see Midleton Distillery become the first and largest carbon neutral distillery in Ireland by 2026. Distilling is an energy intensive process and Irish Distillers is committed to significantly reducing emissions and making a positive environmental impact across all areas of their business. Their plans to leverage break-through emissions reducing technologies will in turn provide a blueprint for the industry and other distilleries in Ireland.”

Commenting on the announcement, Tommy Keane, Operations Director at Irish Distillers, said: “With the climate crisis at a critical juncture, Irish Distillers is committed to reducing our environmental impact across our entire value chain and an area that we cannot ignore is how we power our distillery. While the technical challenges the team face in transforming our operations at Midleton Distillery to become carbon neutral are considerable, we believe that with the help and support of our partners at home and across the globe, this is possible. We are committed to doing the right thing for our industry, people, and communities. Together, we can make a real impact.”

Notes to the editor

In operation since 1975, Midleton Distillery is Ireland’s largest distillery and the beating heart of Irish whiskey. Producing more than 70 million litres of pure alcohol per year, it is home to some of the world’s most well-known and successful Irish whiskeys, including Jameson, Powers, Redbreast, Midleton Very Rare, the Spot family and Method and Madness.

Since 2010, Irish Distillers has invested over €100 million to improve operational efficiency at the distillery, which has already resulted in a 30 percent reduction in energy consumption and 47 per cent reduction in C02 emissions per litre of alcohol produced over the last 12 years.

Irish Distillers is Ireland’s leading supplier of spirits and wines and producer of some of the world’s most well-known and successful Irish whiskeys. Led by Jameson, our brands are driving the success of Irish whiskey globally. Jameson is the world’s fastest-growing Irish whiskey, selling 9.4 million cases in 2021. Our brands are exported to 130+ markets around the world, with many of those experiencing double-or triple-digit growth.

Irish Distillers was formed in 1966, when a merger took place between John Power & Son, John Jameson & Son and Cork Distilleries Company. In 1988 Irish Distillers joined Pernod Ricard, gaining access to unprecedented levels of investment and an extensive global distribution network. Since 2012, we have invested over €250m to double our production and bottling capacity to meet global demand for our products.

We employ over 650 people across our operations in Cork and Dublin.

Pernod Ricard is the No.2 worldwide producer of wines and spirits with consolidated sales of €8,824 million in FY21. Created in 1975 by the merger of Ricard and Pernod, the Group has developed through organic growth and acquisitions: Seagram (2001), Allied Domecq (2005) and Vin&Sprit (2008). Pernod Ricard, which owns 16 of the Top 100 Spirits Brands, holds one of the most prestigious and comprehensive brand portfolios in the industry, including: Absolut Vodka, Ricard pastis, Ballantine’s, Chivas Regal, Royal Salute, and The Glenlivet Scotch whiskies, Jameson Irish whiskey, Martell cognac, Havana Club rum, Beefeater gin, Malibu liqueur, Mumm and Perrier-Jouët champagnes, as well Jacob’s Creek, Brancott Estate, Campo Viejo, and Kenwood wines. Pernod Ricard’s brands are distributed across 160+ markets and by its own salesforce in 73 markets. The Group’s decentralised organisation empowers its 19,000 employees to be true on-the-ground ambassadors of its vision of “Créateurs de Convivialité.” As reaffirmed by the Group’s three-year strategic plan, “Transform and Accelerate,” deployed in 2018, Pernod Ricard’s strategy focuses on investing in long-term, profitable growth for all stakeholders. The Group remains true to its three founding values: entrepreneurial spirit, mutual trust, and a strong sense of ethics. As illustrated by the 2030 roadmap supporting the United Nations Sustainable Development Goals (SDGs), “We bring good times from a good place.” In recognition of Pernod Ricard’s strong commitment to sustainable development and responsible consumption, it has received a Gold rating from Ecovadis and is ranked No. 1 in the beverage sector in Vigeo Eiris. Pernod Ricard is also a United Nation’s Global Compact LEAD company.
Pernod Ricard is listed on Euronext (Ticker: RI; ISIN code: FR0000120693) and is part of the CAC 40 index.

Nutritics launches Foodprint, an automated system for estimating carbon emissions and water use in the hospitality and food service sector